Excerpt from Chapter One

My name is Logan Pyle. My father is dead, my wife is indifferent, and my son is strange. I’m thirty-six years old. My life is nothing like I thought it would be.

The three of us plus one dog, Jerry, live in my childhood home, a sweet and sturdy Craftsman-style bungalow on a quiet block in a tree-lined section of a small Western city that was until the end of the last ice age the bed of a glacial lake. We sit at the confluence of three rivers, two of which — the Clark Fork and the Blackfoot — come together just east of town. A few miles downstream they receive a third, the Bitterroot, and the three persist across the Idaho panhandle and into the great Northwest as one. The scenery — the natural world in general — gets a lot of attention here. We’re ringed on all sides by mountains, and the sugar maples that line our streets turn outrageous shades of red and orange and gold every fall.

So here we are, autumn. Another early morning, this one a Saturday, which means swimming lessons at Owen’s school. I’m up in his room, digging through his top drawer with one hand, balancing him awkwardly on my hip with the other.

“Where’s the blue, Jules?” I shout in the direction of the stairs. “It’s a blue day, but I only see red. Julie,” I shout once more. A sudden pain clutches at my spine. “Fuck. Four is too big to be carried,” I tell Owen, depositing him a little roughly on the bed. Right away, his thumb is in his mouth.

“You sure it’s blue?” asks Julie, rather dreamily, from downstairs.

“Four and three-quarters,” he says, showing me the fingers of his free hand.

“Exactly my point. Now come on. Take that thumb out and help me look.”

“Julie,” I shout again. I give up on the top drawer and start in on the middle. “Sometimes in life we have to do things we don’t want to do,” I tell Owen. “It builds character.”

“What’s character?” he asks, around the thumb.

“Pardon? I can’t understand you with that thumb in the way.”

He takes the thumb out and says, “What’s character?” then pops it right back in. Flipping over, he buries his face in the pillow and sticks his rear end in the air.

“Baby sleeping,” he says again. I sit down next to him and rest my hand on his rump.

He’s been carrying on this way for weeks now — “regressing,” according to one or another of the myriad parenting books Julie’s perpetually reading half of, then quoting to me. Besides the thumb, he’s gone back to the bottle and climbing into our bed in the middle of the night, and he even insists on wearing a diaper some days under his pants. And now and then he’ll slip into an odd, German-sounding baby talk it pains me to hear. Julie insists it’s normal, or at least common — “‘a phase many children experience,’” she read aloud to me last week, while we were getting ready for bed. “‘It’s incumbent that the parents of the distressed child recognize his or her behavior as expressing a critical emotional need and react accordingly,’” she said, laying the book down. “What that means is that we have to act like whatever Owen does is okay.”

“But it’s not okay,” I said, right before she turned out the light.

Now I reach up and pluck his thumb out of his mouth. “Julie,” I shout once more. “Could I get a hand up here?”

I hate yelling between floors; it’s no way to communicate. I tell Owen to stay put, but he follows me down the stairs anyway and into the kitchen, his bare feet slapping the terra cotta tiles. Julie is not here. She’s not in the living room, either, or at the built-in desk we share under the stairs, where she sometimes works in the mornings, before Owen and I get up.

I find her in the dining room, standing in a square of sunlight by the picture window, braiding and unbraiding her hair, looking out. I pause in the doorway. I can see she’s deep in thought, and I wouldn’t be hard-pressed to guess about what. She’s a lawyer, and to say the case she’s working on at the moment takes up all her time is a gross understatement of the facts. 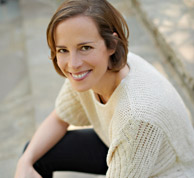