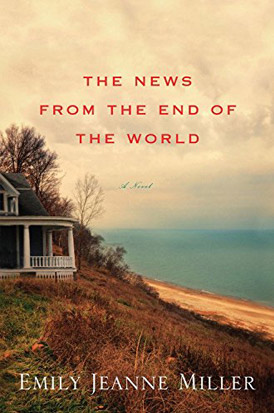 “This one’s a winner.”
—People Magazine

“With wonderfully crafted characters and expert pacing, Miller has written the kind of narrative that readers crave: a beautifully written, hard-to-put- down story that will stay with readers long after the book has been closed.”
—Booklist

“Told in the diverse voices of several characters, one cannot help but empathize with the differing situations while getting to the crux of each one’s concern… Contemplation runs deep, making this a thought-provoking read… All families suffer from some dysfunction or problems, and this novel is sure to open many eyes. Filled with angst and apprehension, this presents the realistic insight into modern predicaments, yet demonstrates things can change and families can mend.”
—New York Journal of Books

“Miller’s immersive second novel covers four difficult days in the life of the Lake family on Cape Cod, Mass. With little explanation, the jobless, recently dumped Vance has come home to stay with his twin brother, Craig. Craig, sullen and angry, has his own problems to deal with—both financially and with his family. Craig’s 17-year-old daughter from another relationship, Amanda, is unexpectedly home from a trip to South America but no one will tell Vance why. Used to a close relationship with his oldest niece, Vance is stunned and hurt by her sudden coldness. Craig’s wife, Gina, usually the rock of the marriage, is struggling with her rebellious stepdaughter and has recently begun contemplating an affair. Only exuberant, talkative Helen, Vance’s 10-year-old niece, and the baby, Cam, seem unaffected by the turmoil in the household. As the story unfolds, old resentments get tangled up with new secrets, and each member of the family stews over the burgeoning crises. The unique landscape of Cape Cod in the offseason sets the stage for Miller’s poignant, fast-paced family drama. Told in alternating points of view, this gripping novel gets to the heart of the familial trust, independence, and the struggle to overcome the past in order to forge a happier future.”
—Publishers Weekly

“Miller has created a quirky, relatable family. It is impossible to finish this book until everyone’s issues are resolved, while hoping in the meantime that the resolutions will be positive.”
—Library Journal, Andrea Kempf, formerly with Johnson Cty. Community Coll. Lib., Overland Park, KS 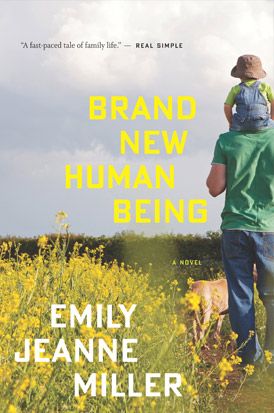 A “compelling first novel…The strength of “Brand New Human Being” is its realistic portrayal of trauma and its aftermath. Death, birth, disease and survival all have their messy consequences in these pages. Miller, who was born and raised in the District, is especially good at showing the sloppy nature of relationships in the wake of upheaval.”
— The Washington Post

“A whip-smart first novel that gripped me with its wry humor and wonderfully real characters, and kept me captivated through the last page. This is a fast-paced, first-rate book by an immensely talented new writer.” 
— Curtis Sittenfeld

“Emily Jeanne Miller’s debut novel tackles the meaning of fatherhood in the modern world. Introspective and honest, Brand New Human Being focuses on the small dramas inside Everyman’s living room: the way all parents strive to be better than they are, the way a marriage can start to fray even with the best intentions, and the way love, however elusive, is always worth fighting for. Miller’s novel is sometimes funny, sometimes heartbreaking, but always a worthy, exciting read.”
—Siobhan Fallon, author of You Know When the Men are Gone, winner of 2012 PEN USA Literary Award for Fiction

“This fast-paced tale of family life follows stay-at-home dad Logan Pyle as he tries to save his floundering marriage, find personal fulfillment, and figure out why his nearly five-year-old son wants to be treated like a baby—all while addressing the comical and quotidian quandaries of parenthood. (Where is my kid’s bathing suit? Why does this frozen pizza taste like cardboard?)
—Real Simple